The Pasty Tax and 'Silly Politics' 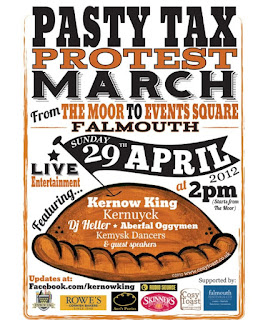 With the Pasty Tax Protest in Falmouth this Sunday I thought I would say a few things about the whole pasty tax thing.

First of all, I feel that I should point out that I own a fish & chips business.

I mention this because fish & chips have been used as a justification for taxing pasties by some of the media and politicians that support the idea of tax on Cornish pasties. The argument is that if fish & chips are vatable then why shouldn't pasties be? Indeed the National Federation of Fish Fryers (NFFF) is arguing that pasties and the like should be taxed the same as fish and chips.

I own a fish and chip shop and I am against the tax.

I am against it for several reasons.

First of all when I sell fish and chips I cook the food and then keep it hot for customers. I am providing a hot food service for my customers. If they come to my shop they know that their fish and chips will be hot. In additon to an obvious commercial reason for serving my food hot I have a legal, food saftey duty of care to keep it at a temperature that keeps it safe.

Fresh bakery products are different. They are produced and displayed with no attempt to keep them hot. Once a pasty has gone cold, and passed the time that it is safe to eat, it will be discarded as waste. The two systems may seem the same to uninformed politicians, who see things in simplistic terms, but they are, in fact, two very different modes of production. If (as happens a lot outside Cornwall) pasties are cooked by a food outlet and then kept warm then this is a different scenario and this type of sale will already be subject to VAT.

The question that George Osborne is really posing is whether Pasties should be seen as a luxury type food rather than a staple food. Sometimes, if I am lucky I can go to a supermarket or bakery and buy bread that is still warm because it is fresh out of the oven. Is George Osbourne saying that VAT should be charged on bread? Pasties, when baked and sold fresh, should be treated as a staple food - like bread. If they are kept warm then they become the same as any other 'luxury' take away food.

My second reason for being against the pasty tax is that I would find it very hypocritical if I wasn't. Not from a Cornish nationalist point of view but from a fish & chip point of view. To explain this I need to debunk another myth that politicians (especially UKIP types) use to justify the tax. The argument is that we are having to tax pasties because European regulations require us to do so. Well I don't thik this is true. The reason that I don't think this is true is this. For years the NFFF have been campaigning that VAT should not be applied to fish and chips. If I have understood correctly, the main basis of this campaign is that in other European countries fish and chip 'type' operations are not subject to VAT and so we in Britain should have a level playing field. This is why I find it hypocritical for fish and chip shops that would gladly support a campaign to take themselves outside VAT regulations then call for VAT on pasties.

My third reason is a very slefish business reason. Living in Cornwall, I know, and understand, that a pasty is a staple food - my fish and chips are not. If pasties cost more then my customers are more likely to cut back on luxuries (my fish and chips) in order to continue to enjoy their pasties. For me, as well as pasty producers, VAT on pasties will be bad for business.

Finally, and most importantly, Cornish pasties are an extremely important part of the Cornish economy and identity. A tax on Cornish pasties will amount to an indirect attack on our culture and a direct attack on our economy. It is exactly this lack of knowledge, understanding and caring about Cornwall that is demonstrated time after time by Westminster politicians and which we allow to continue by voting for London-centric political parties.

My final point leads me to the silly 'silly politics' quote from Anrew George recently. Dick Cole pointed out that Liberal Democrats in Cornwall were out of step with their masters in London almost continously. He suggested that, as they were so often campaigning for things that weren't their party's official policy, they should do the right thing and resign from the Liberal Democrat party. Andrew George said that this was silly politics and that the pasty tax was not a resigning issue.

The question for Lib Dem politicians is what is a resigning issue? We have already seen them campaign against tuition fees, NHS cuts, imposition of a rise in VAT, the Cornwall/Devon parliamentary constituency and now the pasty tax. However much Lib Dems make a lot of noise in Cornwall and give the impression that they are campaigning on behalf of the people of Cornwall, still they get nowhere. Indeed, most of the time, seemingly in order to further their career, they quietly skulk through the Westminster lobby and vote for the thing that they have been campaigning against in Cornwall. It will be interesting to see if this happens again over the pasty tax.

Mr George, I don't think MK were indulging in silly politics but simply asking you to to try some principled politics.
Posted by Stephen Richardson at 07:29