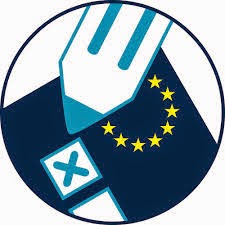 On Thursday 22nd May the UK will go to the polls to elect our representatives to the European
Parliament.

Paradoxically the polls indicate that the most anti-European party, UKIP, will do well. Am I the only one who doesn't understand why we elect people, who have no raison d'etre other than getting out of Europe, to fight our corner within Europe? UKIP MEPs, usually aligning themselves with right wing pan-European groups, have done an apalling job in representing us here in the UK - a lot of the time they can't even be bothered to turn up. UKIP MEPs have failed our fishermen with their arrogant absences and voted against European initiatives aimed at protecting and promoting Cornish culture.

Unfortunately, this time around, Mebyon Kernow, will not be represented in the European hustings. For us the system is so undemocratically skewed as to make it almost completely pointless for us to enter the race. The last time around we beat the Labour party in Cornwall with 7% of the vote. Despite this, because of the sheer size of the Euro constituencies, we still lost our hefty £5,000 deposit. In fact, the anti-democratic nature of the system means that, even if the whole of the Cornish electorate were to vote MK, we would still not get a MK MEP! Given these facts the only thing that we could hope to achieve for our £5,000 would be to see our names on the ballot paper and allow the growing habbit of people to vote for MK to continue.

The official MK position on the Euro elections is that MK  will not be supporting any one party in the elections - the decision to vote for any particular party will be a choice free from MK party political influence. Personally I will be voting for the Green party - for me any London based party is out - and that most definitely includes UKIP.

But what if MK had stood and I had been included in an MK slate of candidates?

Well I would have been campaigning hard for an in/out referendum. I believe that the UK, and particularly Cornwall, is better off within the UK - but I am a democrat and I can see that there is absolutely a case for allowing the people to have a say on whether they remain part of the EU.

Besides it being the democratic thing to do, there are two very important reasons why it it would be good to have a referendum as soon as possible.

First of all I think that the uncertainty is doing the UK a great deal of harm. Foreign investors look at us and wonder if we are worth investing in. If an investor wants to invest in a country at the heart of Europe they will not be considering the UK for a while. At the same time if the investor wants someone outside the EU then we are clearly ruled out for the time being. This uncertainty can't be good for business one way or the other. Our Wetsminster politicians need to stop looking at what spin is best for their party and start to look at what is good for UK business.

Secondly, whichever way the vote went - in or out of the EU - it would spell the end for UKIP. A referendum on Europe would demonstrate the will of the people. If we left Europe then the single purpose pressure group that is UKIP would have nowhere to go. It has no policies of note other than to leave the EU and scaremonger over immigration. If we stayed in the EU then  it would be clear that the UK public had didsmissed the UKIP experiment and they would fade into oblivion.

MK is a collaborative party, we don't believe in the isolationist and separatist politics of UKIP and the Tories. For me it makes no sense for anyone living in Cornwall to vote to leave Europe. The investment that we receive from Europe would never be matched by a Westminster government that was outside Europe. Cornwall receives far more cash from the EU than we pay into it in the form of taxation through Westsminster. If we left the EU then the money we no longer paid into Europe would inevitably be invested in London and the South East of England. Tax payers in Cornwall voting to leave the EU would be like turkeys voting for Christmas.

Am I completely happy with the way Europe is managed for Cornwall? Of course not. There are many ways that we can make the EU better for Cornwall and for all the member states. We need reforms that make institutions more accountable. We need our elected representatives to have greater powers and the political appointees have less. We need policies that direct European investment into producing real jobs rather than encouraging white elephant projects such as Heartlands in Pool.

But then the EU isn't responsible for Heartlands. It is our own politicians that were allowed to dream up that particular failure all by themselves. This is why we need a strong Cornish Assembly. We need a body that can take European funding and make it work hard for Cornwall instead of working hard to enhance someone's CV. We need a Cornish Assembly that will establish an office in the EU governmental workplace to promote Cornish interests at the heart of EU governance.

And perhaps a Cornish Assembly would give us the opportunity to press for a Cornish Euro-constituency - why shouldn't we have an MEP of our own that wasn't shared with Gibralter?
Posted by Stephen Richardson at 02:49