Why do we want to build new homes? 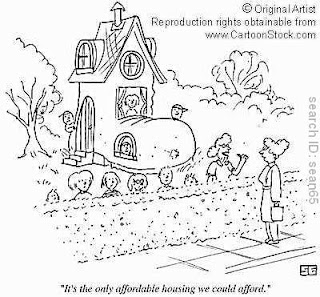 Why do we want to build more homes?

It sounds like a bit of a daft question really? We need homes to solve the 'housing crisis' is the answer.

I recently blogged about the fact that there is no such thing as an affordable house for the average person in Cornwall. So why is the government trying to 'kick-start' the house building market? What is the point in using our taxes to enable developers to build homes that only someone earning the salary of an MP can afford? Building new homes will not solve the housing crisis as long as people can't afford to live in them.

This is the problem with Tory market-driven ideology. We are told that it is important to build new houses in order to provide homes for people - in fact it is simply using our taxes to keep the developers profits going.

How many times do we hear that the free market is the only way to get sutainable growth? If this is true then why does the government want to interfere in that process and keep developers' profits going? It is because houses are to expensive that nobody is buying them - not because there are not enough available. It is the market, which successive governments have allowed and encouraged to get out of control which is the problem. It is no use simply building houses if ordinary people can't buy them - am I completely wrong?

Over the last few days, at our annual conference, MK has spent time in developing a detailed and coherent policy on housing.

We believe that Cornwall needs its own Assembly which can take a different approach. We believe that good quality housing is a fundamental human right and not a privilege for the rich. It is the duty of any responsible government to meet this basic human need - not to boost developers' profits.

The buy to let market is functioning 'very nicely thank you' at the moment. Buy to let magnates make a profit by purchasing housing stock and then renting houses to ordinary people. The rent they receive covers the cost of the mortgage and gives the landlord a bonus profit. All the time their capital asset appreciates in value it is being paid for (and then some) by the inflated rent receipt.

If private speculators can make this work, and make large profits, then MK believes that it is possible for the people of Cornwall to build their own houses with a rent that covers the cost of loan without the need for profit. In other words, schemes like this would be self-finacing and would not cost the tax payer anything.

As I stated above, we have a whole raft of policies and proposals for dealing with the housing crisis in Cornwall. Meeting Cornish problems with Cornish solutions - putting Cornwall first.
Posted by Stephen Richardson at 03:34