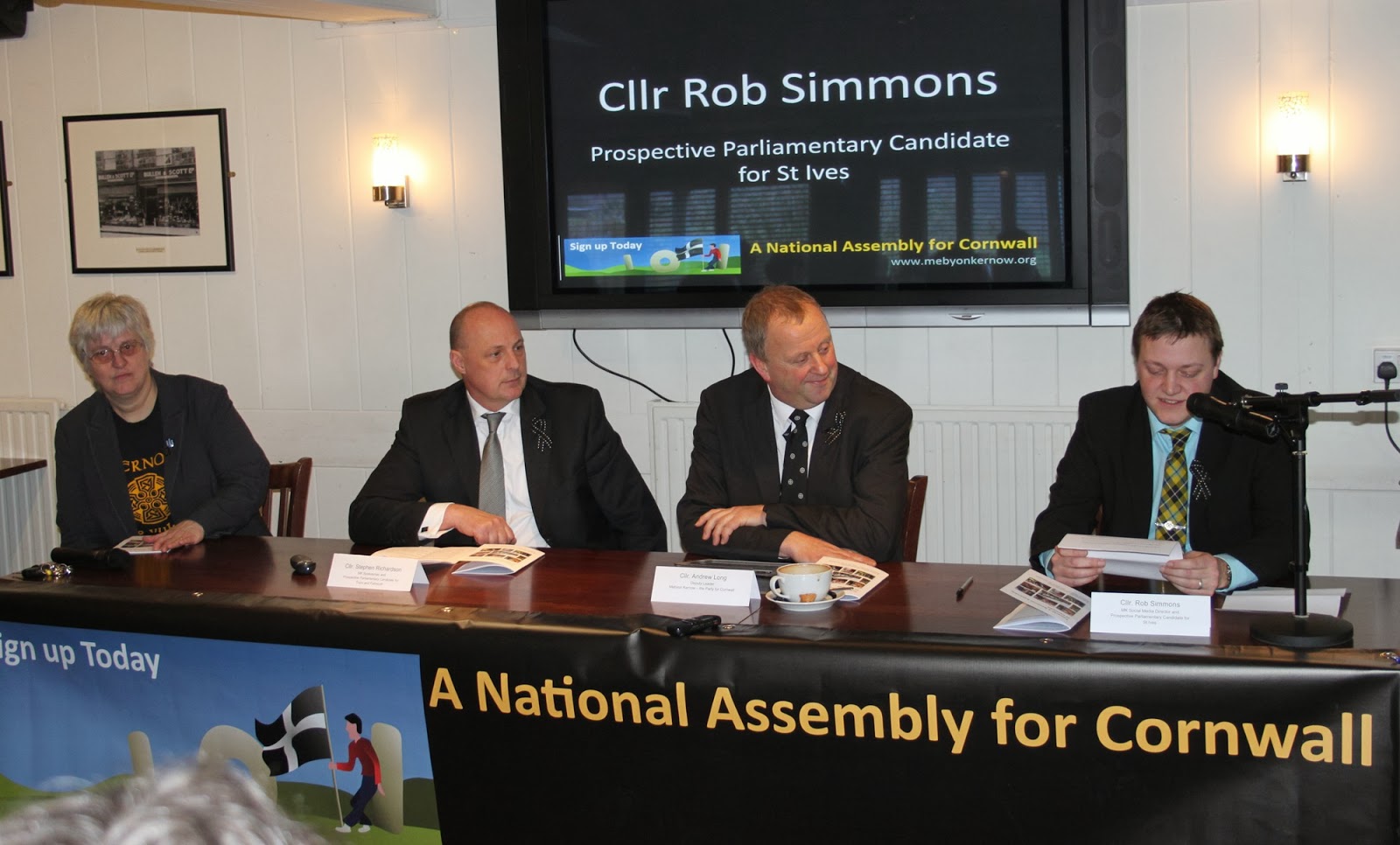 Today, St Piran's Day, we launched our White Paper "Towards a National Assembly of Cornwall".

It was good to finally start our conversation with the people of Cornwall with meat on the bones of our ideas for a national Cornish government.

The document is comprised of 28 pages packed with 71 numbered facts, ideas and principles concerning a Cornish Assembly.

It was good to see a television crew from Wales as well as newspaper reporters from Cornwall.

Below is my speech:

George Bernard Shaw once said that:
“Democracy is a device that insures we shall be governed no better than we deserve.”

And that is what our White Paper - “Towards a National Assembly of Cornwall” is all about.

It’s the beginning of a conversation with the people of Cornwall - and with the UK government - which we expect will end with a better form of government for Cornwall - the form of Cornish government that we deserve and which can make the difference to the lives of people living here. “Towards a National Assembly of Cornwall” has 28 pages.

It has 71 numbered paragraphs, each of which contain an idea, fact or principle that we believe should form the basis of a discussion. A discussion as to why Cornwall deserves the democratic tools that it needs - and a discussion as to how to best to use those tools to make the difference.

We want to hear from anyone who believes, like us, that Cornwall should have enhanced powers to take democratic decisions on the matters that affect us most of all.
We recognise that there are groups and organisations that may believe in Cornish self-government but who think differently to us about exactly what we should be aiming for and how we should achieve it – well, let’s talk!
Let’s talk about our ideas and yours. Let’s see where there is an existing consensus and where we can work towards achieving one.
Let’s talk about what Cornwall deserves and how we can present that both to the people of Cornwall and the politicians of Westminster.
Let’s talk about how we craft a new settlement which will recognise the sovereignty of the Cornish people and provide government which understands the unique challenges that face us. Government which can use the distinctive characteristics of our people to meet those unique challenges.
Let’s demand a new democratic settlement for Cornwall instead of always talking about how we are too small, too poor or too stupid to make decisions for ourselves.
What we believe to be essential is an Assembly which has strategic national powers - a truly national government rather than just a supersized local authority.


If we are to make the difference for Cornwall then we need to be able to co-ordinate our education syllabus with our employment opportunities. We need to link our housing needs with our social and environmental responsibilities.

We need to offer joined up social care which is delivered by people who talk to one another instead of operating through a chain of command beginning at a W1 postcode.
All of these things are covered in the White Paper.

“Towards a National Assembly of Cornwall” is not about small details. It is not about what colour the seats in the Assembly chamber should be.

It is, however, about working out the general principles which will allow us to go on and reach a conclusion about those small details.

Of course there are some things that it is crucial that we discuss in some detail in order to create a framework on which we can hang a developing picture.

For example, how many representatives do we need to elect in order to create a properly functioning national government? Well we advocate around 40 Assembly Members. This would allow us to have a strong executive and yet still provide incisive scrutiny of that executive.
40 Assembly Members elected for four year terms to ensure that they are answerable to the electorate at frequent intervals.
How should we elect our 40 Assembly Members? Well, our conviction is that a single transferrable vote system and proportional representation is the best way to do this - but are there better ways? These are the conversations we need to hold.

And while we’re at it let’s talk about how we really take democracy for Cornwall to new levels and let’s reform our local government.

We believe that the geography and demographics of Cornish communities mean that they would be best served by having four unitary authorities instead of the one size fits all Cornwall Council that we have now.
Why not seize the opportunity and introduce real localism to local government and devolve meaningful powers to towns and parishes and reverse the Westminster approach of centralising powers to London?

But National government for Cornwall is not just about the dizzily exciting and glamorous things such as STV, block grants and subsidiarity.

Oh no! It’s also about our relationship with the UK government, with Europe and the rest of the world – and, naturally, these subjects are all covered in the White Paper as well.

As well as 71 ideas, facts and principles “Towards a National Assembly of Cornwall” contains a Frequently Asked Questions section.

One of the FAQs that we answer is “Wouldn’t a National Assembly cost us all a lot more?”
No – it wouldn’t.

A National Cornish Assembly could be funded by a block grant just like the Welsh Assembly and Scottish Parliament are currently funded. This would mean that the money that Westminster already spends on our behalf would form the basis of the National Assembly budget.Mebyon Kernow is confident that a new democratic settlement for Cornwall would actually save money and allow us to boost the Cornish economy by using what Westminster already spends in a more productive way.

For example the increased democratisation of Cornwall would lead to the abolition of a large number of unelected bodies – or quangos. This would save money on expensive unelected officials.
A National Assembly of Cornwall would also ensure that much of the business of government and administration, presently carried out in places such as Bristol or London, would be happening right here in Cornwall – creating a significant number of new well-paid jobs.  And a National Assembly would also be best placed to manage the expenditure of the majority of the public sector in Cornwall and to foster the conditions to develop a more successful and sustainable Cornish economy.

Unfortunately time is short – we all have many other things to enjoy on this special day for Cornwall, St Piran’s Day – so I will pass on the baton to Cllr Andrew Long, who is going to talk about a positive and bright future for Cornwall.

Posted by Stephen Richardson at 08:01