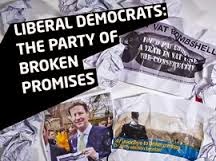 Apparently the Lib Dems have voted to devolve powers to Cornwall at their Spring Conference.

Already we have quote after quote from local Pick 'n Mix luminaries about how Cornwall deserves devolution.

Now I certainly welcome any Lib Dems that have had a 'road to Damascus conversion' when it comes to advocating a National Assembly of Cornwall. However, this doesn't seem to be the case with the Pick 'n Mixers.

The much heralded (and no doubt much overegged and over-exaggerated in future campaign leaflets) Lib Dem policy is not worth the paper it is written on.

It will just be another Lib Dem broken promise for two simple reasons.

First of all there is no detail to it. It is just a broadbrush wish (there's not even enough substance for it to qualify as a 'list').

What powers do the Lib Dems want to be devolved to Cornwall?
How will it all be paid for?
Will there be a truly national assembly or this just a supersized local authority doomed to consolidate the faults of Cornwall Council?

These are just a few of the many, many questions that the Lib Dems don't even seem to have considered - never mind answered.

Secondly, this policy - as sure as eggs is eggs - will be the very first one that will be dropped in any coalition agreement that the Lib Dems enter into. Their leaders in London know it will never happen. They are cynically developing this kind of 'nice to do' policy as canon fodder - policies to be sacrificed - in the battle to remain relevant enough to be part of a colition again in 2015. Instead of delivering a real opportunity to deliver a chance for Cornwall to sort out the economic mess that Londn has got us into the Lib Dems will prioritise an electoral bribe worth a pound or two a week.

The only thing you can trust Lib Dems to do is to abandon any principle except whatever it takes to get elected. The electorate of the UK know this and this is why, up in England, UKIP are now the party of the protest vote (however equally misguided this is).

So please. If you are one of the few remaining Lib Dems in Cornwall, and you really want to put pressure on Westminster to deliver a National Assembly of Cornwall, come and join us at Mebyon Kernow. Only a vote for MK will ever demonstrate that the people of Cornwall are serious about building a better future for Cornwall.

A vote for Cornish Lib Dems is a wasted vote.

Towards a National Assembly of Cornwall
Posted by Stephen Richardson at 05:03