Why Sarah Newton is wrong about the FCPNM 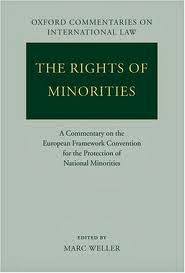 Thanks to the MK Facebook page for bringing this article by Sarah Newton to my attention.

I can't believe how shortsighted and plain wrong Ms Newton is.

Here is my reply:


I have recently read an article by Sarah Newton MP concerning the Framework Convention for the Protection of National Minorities and how the UK should not include the Cornish people within this Convention.Unfortunately Ms Newton seems to have misread or misunderstood the Convention. In her article she claims that the Convention seeks to “to protect from persecution what the EU calls 'minority groups' living within its borders”. In actual fact the Convention’s purpose is “to promote the full and effective equality of national minorities by creating appropriate conditions enabling them to preserve and develop their culture and to retain their identity.” As you can see the official Convention view of its purpose is a lot more positive than the divisive interpretation given to it by our local MP.

Ms Newton goes on to say that she wishes to see the UK’s interpretation of the Convention revisited. Unfortunately, any detail of exactly what she is proposing in its place is only conspicuous by its absence.

More importantly than being wrong about the Convention, Sarah Newton is wrong in her view that it is not right to promote the celebration of Cornish ethnicity. To celebrate ethnicity in itself is not at all discriminatory and, in my view as an Englishman, it is something that is done in an warm and inclusive way here in Cornwall. A view that Ms Newton acknowledges herself.

For centuries, people who come to live in Cornwall have been included in and adopted by Cornish communities. In a reciprocal way the new ideas that new arrivals bring have been assimilated within ever developing Cornish culture. I would argue for Ms Newton to claim that “The definition of identity as a matter of race can exclude people, and restrain cultural expression.” is simplistic in the extreme.

Further it also denies Cornish people their basic human right to define themselves as they would wish. Whether Ms Newton agrees or not, many Cornish people define themselves as Cornish in terms of race and nationality. This is their right and it is this right that the Convention sets out to protect. If you reinterpret this right you are in danger of doing away with it – or is that the intention?
Posted by Stephen Richardson at 08:34