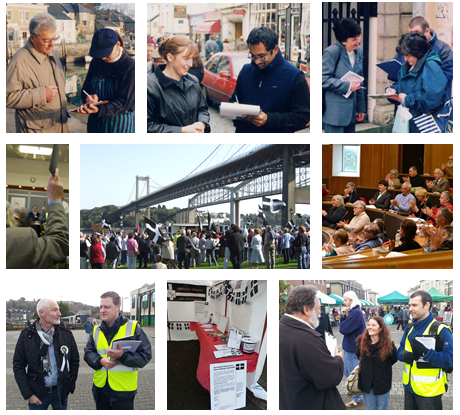 In the document we spell out how a national government for Cornwall could bring governance of Cornwall home to Cornwall. Our vision of an Assemply is a strategic, national government with powers similar to the powers of the Scottish Parliament following the Scotland Act 1998. This would give us the tools and leverage to develop the Cornish economy, protect our health service and stop the concreting of Cornwall.

At the same time we would reform local government and do away with the highly centralised single unitary authority to be replaced by four smaller authorities This would be a strengthening of local government - making it more accountable to the people that elect our councillors - and making it more, well - 'local'.

Nick Clegg will be using the kudos of St Piran's day to indukge in a spree of electioneering.

The Lib Dems present themselves as a party that understands and promotes Cornwall and Nick Clegg has clearly chosen St Piran's Day for electoral purposes.

While he's announcing what the Lib Dems laughingly call devolution, will Nick accept responsibility for the cut in funding to the Cornish laguage? I doubt it.

Will Nick give an assurance that devolution for Cornwall will be a line in the sand in any future coalition deal? I doubt it.

Full of promises and committment now - but will the Lib Dems actually act on any of their promises in the future? I doubt it.

The Lib Dem plans amount to a tinkering with, indeed decimation of, local government. They say that they want to remove layers of bureaucracy whereas, in fact, their plans will reduce the democratic accountability of government in Cornwall even more than so called 'localism' policies already have. More bureaucracy - just transferred away from the people that we elect to appointed civil servants.

Are the Lib Dems seriously suggesting that extra powers and responsibilities can be given to a local government authority and put in the hands of what are often part-time councillors. What's more we're told that the number of councillors would be reduced. This will not save money it will increase costs as responsibilities are transferred to an ever increasing raft of highly paid council officers.

If you think that Cornwall council is not fit for purpose now then heaven help us if the Lib Dems get their way.


Posted by Stephen Richardson at 01:57 No comments:

The Transatlantic Trade and Investment Partnership TTIP is currently being negotiated between the EU and the USA. 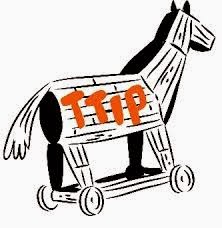 Ostensibly the deal will create a free trade area with the EU and USA as members.

Now free trade is good and to be welcomed as a driver of economic development, however, I believe that there are too many drawbacks with what is currently being negotiated for it to be a good thing overall.

TTIP is likely to threaten environmental and consumer protection laws in Cornwall and could take vital decisions out of the hands of our elected rpresentatives, giving corporations the opportunity to sue governments if their profits are affected. The Investor-State Dispute Settlement (ISDS) will be a new legal tier outside of the EU framework.

Another problem is that jobs could well be even harder to come by as companies switch from the EU to the USA where employment regulations are set at a lower standard than in Europe.

Negotiations are being kept under wraps and I am always wary of any public process that lacks transparency.

All in all the disadvantages and 'dumbing down' of our standards to make creating profit easier and the 'privatisation of democracy' are too high a price to pay for improving the balance sheets of big corporations.
Posted by Stephen Richardson at 08:49 No comments:

Remind me again - why are we building 47,500 houses. Bringing decision-making home to Cornwall.

Mebyon Kernow - The Party for Cornwall has called for all aspects of planning policy and decision making necessary in Cornwall to be devolved to Cornwall.

Planning policy is currently dictaed through the National Planning Policy Framework from Westminster. There is an inbuilt bias in the policy in favour of development because the Westminster parties see house building as a way to solve economic problems and as a way to appease the corporations and wealthy property developers that back their parties financially.

Mebyon Kernow believes that houses should be built purely to meet local need and not simply to generate profit for the big building firms.

Planning applications are dealt with mainly by unelected planning officers who are instructed to follow central government policies and guidelines. In the few instances where our democratically elected representatives are involved with decisions they are often warned about going against the advice of officers due to the costs involved when developers appeal their decisons. All too often the developers win their appeal - the system backs profit-making against community wishes.

It is time to bring all aspects of planning policy and decision-making home to Cornwall.

We should have a national assembly which could produce a strategic, community led policy for development in Cornwall - which would then be implemented by a reformed local government. Power over development should be in the hands of our locally elected and accountable representatives - not in the hands of big business backed by central Westminster government.

And this issue is so vital here in Cornwall that we need this devolution of power even ahead of  a national assembly. We need to set our own policy and to to have all the mechanisms and appeals based here in Cornwall and overseen in a truly democratic way.

If you want to see an end to the concreting over of Cornwall, the only hope is to vote for Mebyon Kernow and send that message up the line to London.
Posted by Stephen Richardson at 23:11 No comments: Rob Simmons, good friend, fellow member of MK and MK PPC for St Ives has recently blogged about his pledge to the voters of the St Ives constituency.

The Free Vote Voluntary Recall Alliance has asked that politicians abadon the practice of putting their party before the people they are supposed to represent.

For me one of the worst aspects of Westminster party politicians is that they are generally career minded above all else. Candidates for Labour, the Tories, UKIP and Lib Dems know that if they are elected they are on the first steps of a highly lucrative career path. As well as a very big salary they can claim expenses and, as we have seen recently, can even get other jobs as well as being an MP. If they do a really good job, and vote the way that their party bosses in London tell them, they might look forward to remaining the candidate for their party in the next election to start the process all over again. In the meantime the very loyal party politicos will be rewarded with ministry jobs to supplement their income. After their parliamentary career is done they will walk into highly pais directorships or consultancies - all they have to do is keep their noses clean, not criticise the party and vote as they're told.

As a member of Mebyon Kernow I believe in policies that are designed to put Cornwall first, to make a difference to the lives of people in the Duchy. I am happy to say that I fully support MK's policies and I am standing for election on that basis. If I am elected it will be because people have voted for me knowing what I stand for. But that doesn't mean that I would automatically vote as MK might want me to at Westminster. Each issue, each vote in the Commons is a separate matter and deserves full consideration as to how it would affect constituents in Truro and Falmouth. While I would work to promote MK, because I believe in their ethos, my position as an MP would be outside of that remit and my work as an MP would be to promote the interests of constituents and not the party.

So, like Rob this is my promise to the voters of the Truro & Falmouth Parliamentary constituency:

I , Stephen Richardson, the Mebyon Kernow- the Party for Cornwall candidate standing for election as your Member of Parliament , do herby promise and affirm, that if I am elected to be your Member of the Westminster Parliament  in the General Election on 7th May 2015. I will adopt and act in accordance with the terms of the Free Vote Voluntary Recall Alliance Pledge as published at www.fvvra.org  and I will maintain this, my personal pledge throughout my term as your Member of Parliament”.
Posted by Stephen Richardson at 01:26 No comments: