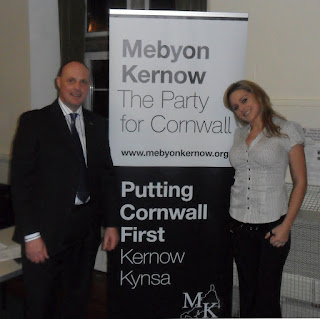 Last night Lawrence Molton and I hosted a public meeting at the Illogan Wellbeing Centre on the subject of development in Cornwall.

I was very heartened by the excellent turnout - I wasn't sure if people would turn up.

I was particularly encouraged because, amongst the people who attended, was the young lady in the photo. If Cornish politics is to be rescued from middle aged or retired men, like me, then we need to encourae as many young people to engage with the system as possible. MK has several young councillors leading the way in this field.

Also speaking at the meeting were Cllr Jean Charman, in her capacity as the chairman of the Trelawney Alliance, and Dr Bernard Deacon from CoSERG.

Our guest speakers were very well received and the residents of Illogan were unanimous in their condemnation of the Core Strategy proposal from Cornwall Council.

Just as it was at the Trelawney Alliance meeting a few weeks ago, it is clear that there is a groundswell of opinion that does not understand why we need to build a minimum of 48,000 houses in Cornwall.

In Park Bottom (part of Illogan Parish) there is a plan to build 300 houses - this will literally double the size of the village. What nobody can understand is just who all these houses are for. It is clear that doubling the size of a Cornish village is not necessary to house people from that village.

In fact it is clear from the evidence of ONS figures that Cornwall has a falling indigenous population so the extra housing must be for in-migrants and not for the people of Cornwall.

Even allowing for decreasing household size and a reasonable level of in-migration CoSERG have calculated that somewhere in the region of 12,000 - 13,000 houses would be required in the next twenty years. Even though it is easier to get blood from a stone than it is to get Cornwall Council planners to admit it, it is clear that a minimum of 35,000 houses will be built in order to encourage in-migration.

Only Mebyon Kernow have a housing and planning policy that is tailored to the needs of Cornwall. We believe in building houses predominantly for local need - not developers' greed. MK also advocates commencing a programme of building proper council houses again - rather than following the Westminster ideology of selling as many as possible.
Posted by Stephen Richardson at 05:54