Last evening saw the inaugural meeting of the Redruth and District Branch of Mebyon Kernow THE Party for Cornwall.

The Camborne, Redruth and Hayle constituency area has been divided to allow us to provide even more locally based opportunities for people to get involved in Cornish politics. Our new geographic area runs from Illogan in the North down to Wendron in the South. Camborne and Hayle have formed their own branch.

The Redruth branch is off to a strong start with members already including two Unitary councillors and seven Parish and Town councillors.

After agreeing a formal constitution we have begun work on plans for the 2013 elections.

It was also extremely encouraging to welcome new members - even at our very first meeting!

If anyone out there is reading thiis, lives in the Redruth district and wants to do more to help MK put Cornwall first, please get in touch.
Posted by Stephen Richardson at 10:00 No comments: 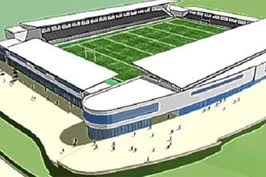 Sportva Kernow should be an national iconic project for Kernow, uniting the people of Cornwall in a pusuit of sporting excellence.

Instead, the reality is that the stadium project, as it stands, will never be more than a lieral political football passed between all politicians across the Duchy.

Even Cornish nationalists are to blamefor this.

As a Cornish nationlaist I believe that Cornwall deserves and requires the opportunity to foster sporting prowess in our children, to provide a modern and technically excellent base for our finest sports teams and to allow the everyday sports fan the chance to spectate at world class sporting events. A stadium should be a national project for the benefit of Cornwall.

Forget the 'business case'. Supporters of the stadium who argue that our economic problems will be solved by a sporting panacea are quite simply deluded. The Conservative and Independednt parties, in their shadowy dealings to get public approval and planning permission for the project have attempted to bribe us with the creation of hundreds of jobs and the idea that new customers will not only vist the stadium but flood into the local shops and businesses to deliver a new era of economic prosperity. If building a stadium were to so easily turn a profit is it not likely that some greedy developer somewhere would have already done it and even now be raking in the economic benefit? We are told to trust the private sector to deliver economic prosperity - well surely we should trust them when they tell us that it's not worth their while.

A stadium for Cornwall should be a national project for all the people and not just a plaything for sports fans. It certainly should not be a plaything that has cost us the development of open space. Many acres of Cornish countryside covered with yet more housing ready for yet more people to move here. There should be a real and thorough consultation process as to the location of a stadium and not a mere sham, ignoring the wishes of local people, which has been engineered to show how Langarth is the only possible option.

Most importantly we need to discover whether the majority of the people of Cornwall agree that Sportva Kernow would be a positive way of building national sporting excellence and identity or whether they think that it would simply be an expensive white elephant that has cost not only money but also a lot of tarmac.

Whatever happens from now on, it is clear that the whole process has been mismanaged to suit the commercial interests of greedy developers and to provide a chance to enhance the odd CV. This mismanagement, far from uniting the average person on the streets, will be a cause of concern and controversy for as long as it takes to build a stadium and then some. Hardly the legacy that you would hope for from such an iconic project.
Posted by Stephen Richardson at 04:09 4 comments:

Lots of Opposition But No Sensible Alternative

The Lib Dems are at it again. This time the subject is Council Housing. The Tories and Tory Lites (Independents) are in favour of following the dictat, handed down from Westminster, that we must sell what little council housing stock remains in Cornwall.

As usual this Westminster dictat is a Lib Dem Nick Clegg backed dictat and as usual the Lib dems in Cornwall argue against it.

While they might be correct to argue against their own policy of selling council housing they have no real alternative.

MK is the only party that has a housing policy that is tailored to Cornwall and the needs of the people of Cornwall.

While the Cornish Lib Dems use hollow arguments merely to be seen to be opposing the Tories, we back up the argumet with real policy.

MK believes that not only should we prevent the further reduction of council housing stock but we should be actively planning to increase it.

We need strong leadership that is not afraid to put Cornwall first rather than simply enforcing a London solution to a London problem here in Cornwall.
Posted by Stephen Richardson at 07:06 No comments: