The UK is heading for Victorian levels of inequality

All of the Westminster parties, whether blue, red or orange tories, are guilty of a political ideology that plays on people's fears and panders to their selfishness.

We are told that poor people are to blame for all of our ills and that they are holding us back. If we could just jettison the shirkers we would all be ok.

Take a look at this video and see how fair a society we have today after more than three decades of Thatcherism.

The UK is heading for Victorian levels of inequality
Posted by Stephen Richardson at 08:05 1 comment:

Despite the fact that Cornwall Council, in its "Full Council, 123 elected representatives" form has already voted for a housing target of 42,000 new houses to be included in our Local Plan - the officers, cabinet members bamboozled by the officers and councillors with an interest in 'regeneration' want more. It is clear that a Local Plan will not be presented to Westminster until our elected representatives have been browbeaten into agreeing agreed with the unelected officials.

Only the evidence that is robust is allowed to carry any weight and it seems that the definition of robust is whatever supports the imposition of housing in Cornwall to meet the needs of Westminster's planning scheme.

We are told that we have to have some unknown amount of housing or else Westminster will put a red pencil line through our 'Local' Plan.

Of curse the argument that is made to try and persuade your everyday voter is that there is a housing crisis and we need to build our way out of it. We need to build affordable homes.

The problem is that the housing market doesn't work that way. If you build more houses you don't simply decrease demand in Cornwall you will increase it. This is because the vast majority of extra properties can't be bought by locals so logically must be purchased by wealthy people from outside Cornwall. Building houses will not have any significant impact on housing people who are in need in Cornwall. It will simply act to keep the average wage down because there will be more people living here without any extra jobs being created. In fact building more houses will make the situation worse.

What about affordables you ask? Well the problem is that 'affordable' in Westminster speak does not mean 'affordable' as you would find it in a dictionary. In housing terms 'affordable' has many different, convoluted definituons which really mean bugger all. And even when a developer agrees to build a small number of affordables this agreement (rarely actually carried out as initially agreed) it just means that open market house prices are inflated further to ensure that a 'reasonable' profit is made.

At the Plaid Cymru conference last week, Leanne Wood denounced the fact that Wales is a net exporter of energy and yet has the highest energy costs in the UK. She said that if the market isn't working for the public then the public should take back the market. This is the only way that Cornwall will be able to sort out its housing challenges. We need to demand control over our own planning system - root and branch. We need a national legislative assembly for Cornwall.
Posted by Stephen Richardson at 02:45 2 comments:

Stephen Gilbert MP has attempted to chivvy Nick Clegg on devolution of a few extra powers to Cornwall Council. He has asked a nonplussed Clegg to ensure that the powers are devolved with more speed and not 'dreckly'. Of course the Deputy PM didn't have an idea of what he was talking about.

Good luck with that Steve!

I wrote to Mr Clegg back in April this year. In May I received a reply from his office which stated that my letter was receiving attention. Not heard from them since.

My substantive reply will be dreckly then I guess.
Posted by Stephen Richardson at 06:28 No comments:

Well done to the residents of the Penwrtha estate in Illogan!

Anyone who has visited the area will know that the open areas are kept immaculately maintained. The grass is cut, cuttings picked up and taken away, hedges trimmed and borders kept tidy. Quite simply it is a pleasure to visit and must be great to live there.

Recently Coastline wanted to replace the contractor who does such a good job and reduce their costs by replacing him with a bigger outfit. Residents knew the value of the service that they were getting as compared with simply haggling about the cost. They have campaigned to make sure that their groundsman is kept in place - even though this means they may pay a little more for the service. For once, ordinary people have taken on anonymous bureacracy and won.

This, for me, is a triumph for community over establishment profiteering. If more people in society were prepared to follow their example and stand up for the good of the community then the world would be a much better place. Well done Penwartha!
Posted by Stephen Richardson at 06:33 No comments: 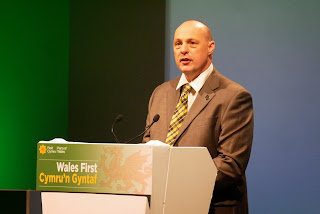 "Jump into the middle of things, get your hands dirty, fall flat on your face and then reach for the stars."
Posted by Stephen Richardson at 08:04 No comments:

My speech at the 2013 Plaid Conference

Below is the text of my speech given at the Plaid Cymru conference in Aberystwyth. 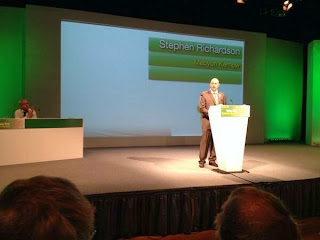 Charles – Prince of Wales - Duke of Cornwall – he received 19 million pounds from the Duchy of Cornwall last year. Let me put that another way for you - whenever His Royal Highness goes to bed he earns over 19 and a half thousand pounds just by getting a solid nine hours sleep – that’s more than either the average Welsh or Cornish person earns for a whole year of hard work – this is something that the people of Wales and Cornwall have in common.