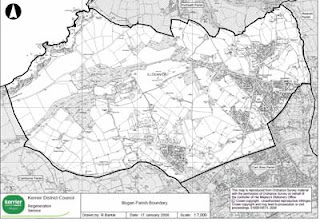 The Illogan Parish Plan has finally been completed and launched.

The process has taken several years and has involved gauging the opinion of the people of Illogan through questionnaires and then a 'roadshow'.

There is no question that an awful lot of hard work has gone into the plan, which has been created by a steering group made up from the Illogan community. A massive amount of data has been collected and opinions have been collated to show where people believe Illogan's strengths and weaknesses lie. Congratulations to all of those involved in putting this document together.

For me though there is one big disappointment. I believe that the most important part of any plan is to provide a clear signpost as to how to achieve the objectives within the plan. In a plan such as this there should have been strong 'SMART' goals.

Unfortunately, it seems that, instead of using SMART principles, the action plan has been made up of some rather non-descript and generically grey 'bureau-speak'.

Cllr David Ekinsmyth, chairman of Illogan Parish Council, and the driving force behind the plan, has said that he wanted a plan that will not gather dust on a shelf. It's hard to see how the action plan will lead to anything but this. Worse still, the final action plan is so vague that there is a danger that it may be used to justify future activity by IPC instead of driving it. It would be very easy to fit any normal, day to day council activity within the action plan and put a tick in a box somewhere.

If you are interested the plan can be found here
Posted by Stephen Richardson at 00:54