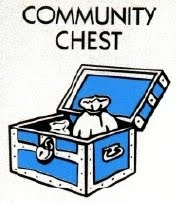 Back in September my son, who is studying media journalism at Staffs Uni, told me how he had approached Stoke on Trent Unitary Council and asked them for details of the councillors' community grants. Stoke Council provided the information immediately and even went on to put this information on the internet for all of Stoke's people to view.

In Cornwall we have a similar system, called the Community Chest. Cllr Alex Folkes has recently blogged about this here. Alex mentions a recent FOI about this subject which, I guess is mine.

All Cornwall Councillors have £2195 available to them to spend on grants for community organisations within their electoral district. I believe that this is a great scheme and a great way to allow councillors, who obviously know their local communities well, a chance to make a positive difference in their locality.

Back in September I asked Cornwall Council the same question that my son had asked in Stoke. Two FOI requests later (both of which have taken longer than the time that they are supposed to be dealt with) and I have been promised the information on Monday.

I have asked for this information to be posted on the Cornwall Council web site because I think it is a brilliant scheme that could do with some publicity. I guess we have to wait and see about that.

Posting the details of the kind of things that councillors and the council have been able to do to help local groups can only be a positive thing - can't it?

In Stoke no FOIs were needed to get the information, the request was dealt with speedily and efficiently and the information was made available to the public in general very quickly. I despair that, in Cornwall, where we have a council that purports to be open and transparent, things take so much longer and are so much more difficult.
Posted by Stephen Richardson at 05:56