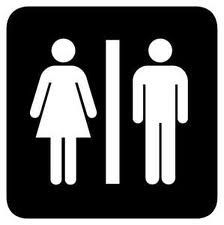 Today Cornwall Council voted to reccommend dropping funding for 114 public toilets in order to save £1.1 million.

Before, during and after the debate, leading members of the twitterati and blogosphere had a field day - mainly opposed to the idea.

I, for one, am all for it. In fact, I don't think the proposal goes far enough.

Some claim (including me) that the Unitary Council has been a complete disaster for Cornwall. Some of its misdemeanours have ranged in cost from a few hundred pounds to possibly millions include: ordering silk ties to improve the 'corporate image', helping to fund Devon in a wasted bid to bring world cup football to Plymouth and the on-going incinerator debacle.

I strongly believe in subsidiarity (in the true meaning of the term) rather than the ideological cost cutting that forms the basis of Tory 'localism'. This is what makes me think that Cornwall Council should stop funding all public toilets and leave it to local communities to manage.

The Unitary Authority should be there to make high level, strategic decisons that affect the way that Cornwall operates as a complete entity. It should be responsible for things like education, healthcare and the co-ordination of emergency services.

In my mind there is no justification for Cornwall Council to micro-manage thing like public toilets. I believe that there would be many benefits, both financial and organisational, if they were managed by towns and parishes.

For example the local community could decide if it wanted the toilets in the first place. They could then decide the best way to mange the service and aspects of that service such as opening hours etc. Local councils could join together to share the costs of maintenace, so as to not lose the efficiencies af scale, and yet still make the contractors far more accountable for the service that they provided. Some toilets might be 'pay as you go' (perhaps in tourist spots) while others might be 'contract' for the benefit of locals. Indeed, there could be a mixture of PAYG and contract at different times of the year - the possibilities are endless and would be down to local people to decide what would be best for them.

Now I can hear, some of you saying "This lets CC off the hook. They are just saving money by badgering local councils into taking responsibility." Well, maybe it does - but ultimately the cost of the service is paid for by through the UA portion of council tax or through the local precept. Surely it will work out better value for money if the service is managed by and made accountable to local people.

There should be more services being devolved to local councils - but we have to face up to the fact that the balance of local taxes has also to swing in favour of the local councils in order to allow this to happen.

This does not mean that I believe that Cornwall Council cabinet have brought about this debate because they believe in subsidiarity. Far from it. They have done it because they are driven by Tory cost cutting ideology, however, why not play them at their own game and rise to the challenge.

At the same time we could throw down a few challenges of our own. Why not transfer car parks to local authorities to manage for the benefit of their residents rather than to (incorrectly as it has turned out) provide funds to subsidise the aforementioned silk ties, Devon football and construction schemes lacking planning permission. Of course, as all these myriad small services that could be provided locally are transferred into local ownership there would be less justification for Kevin Lavery's salary as he would not be resposible for so many different things. There would be less need for so many officers as there would be nothing for them to do. Finally, there would be no need at all for Cabinet Support Members or indeed quite so many Cabinet Members on high 'volunteer' allowances.
Posted by Stephen Richardson at 06:29