Did Cllr Easthorne-Gibbons Manage to Keep a Straight Face? 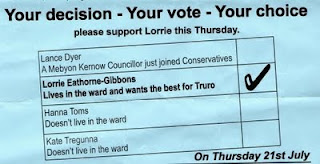 I wonder if Cllr Easthorne-Gibbons managed to keep a straight face (or perhaps she had her fingers crossed firmly behind her back) when she stated for the newspapers:

"I am sorry people misunderstood.

"I am sorry Mebyon Kernow were upset because I give you my word that was not my intention.

"I don't want to give offence to anybody – I wanted to keep everything above board.

"I did everything by the book."

It beggars belief that she can claim that there was no intention to deliberately mislead voters. The evidence is here for all to see in black and white, just as it was before people went to the polls on 21st July.

How could anyone reasonably be expected to work out that the the statement under Lance Dyer's name didn't actually refer to him? To any reasonable and intelligent person, the whole point of that part of the leaflet was to compare the candidates standing to be elected. How could Cllr Easthorne-Gibbins not have intended to mislead?

Of course Lance Dyer should be flattered really. He obviously had the Tories rattled in order for them to behave in such a reprobate manner.

After the general election last year there was a scandal when Labour's Phil Woolas' statements about his Lib Dem rival were ruled to be an illegal practice under the Representation of the People Act 1983.

The judges in this case said:

"The statement was false and the respondent had no reasonable ground for believing it to be true and did not believe it to be true.

"It follows in our judgment that the respondent is guilty of an illegal practice, contrary to section 136 of the Representation of the People Act 1983 with regard to those statements."

My question is what is the difference between these two cases?

Posted by Stephen Richardson at 09:19