The cause of the disconnect between politics and voters? 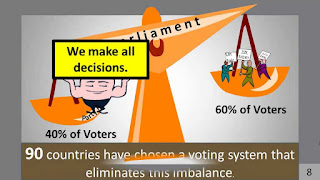 One thing that the referendum has highlighted is a reported feeling of a disconnect between our politicians and voters.

I have read many times that one of the reasons that people have given for voting in the referendum (either way to be fair) is to give the establishment 'a bit of a kicking'.

People feel that no matter how they vote they are not going to get what they actually want.

I think the  obvious cause to this is the electoral system that we use. It is first past the post which is causing this disconnect.

When was the last time that any government won an election with more than 35% - 40% of the vote - possibly a lot less. The Conservatives are currently governing the country when around 65% of people didn't vote for them - is it any wonder the majority of people feel disconnected?

The problem with the system is that we have a government which represents the biggest minority and doesn't reflect the majority view point on the majority of issues.

Political parties are encouraged to come up with policies designed to upset as few people as possible in an attempt to be the least worst option - that seems to be the the way to ultimate power.

We need proportional representation to sort this out as then you could truly vote for what you wanted instead of voting to prevent what you don't want.

If we had proportional representation then getting 20% of the vote might put a party in the strong position that convincing one fifth of the electorate surely deserves. Currently it gets you zero influence.

In the meantime the big parties tell lies, or are deliberately misleading, in order to lose as few votes as possible instead of setting out what they truly believe in order to gain votes.

Of course, this might mean that our governments might be forced to work together more - but is that a problem really?
Posted by Stephen Richardson at 08:21