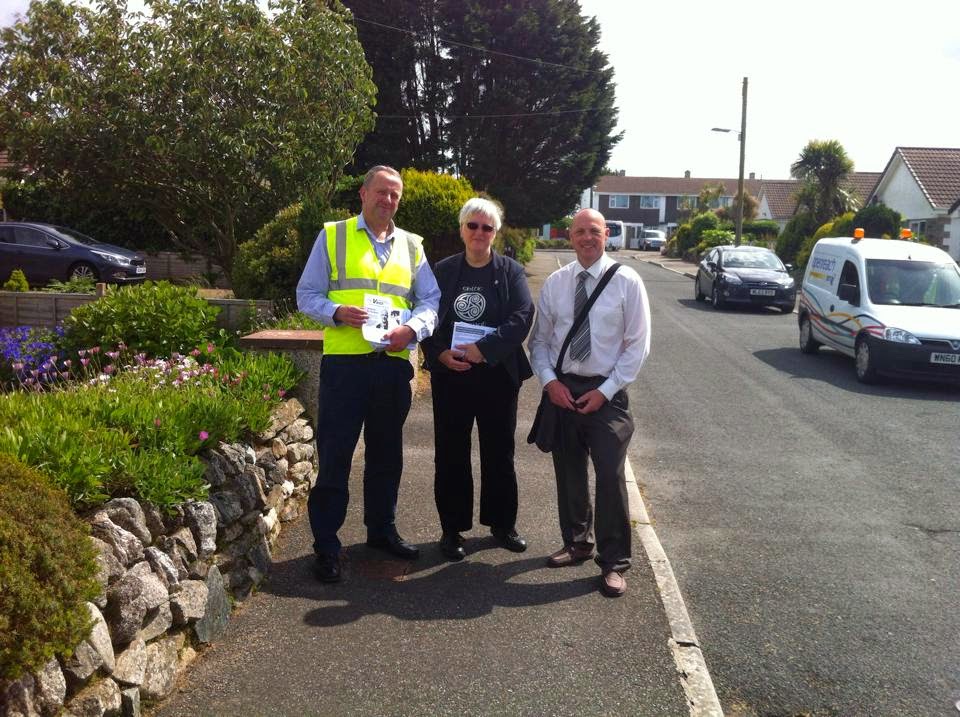 The campaign in Illogan is certainly hotting up - even before the closing date for nominations!

We have already managed to deliver an introductory leaflet across the whole of Illogan and around 750 of a second leaflet.

Yesterday was busy. One team of activists hit the streets to begin the task of talking to the voters of Illogan. There was also another team working hard on leaflet distribution.

Today will be a similar effort with dual teams out talking to people and delivering leaflets. I am absolutely overwhelmed with the support that I have been getting from MK members from all across Cornwall and I really can't say thank you enough or as much as I feel.

As far as I know, at the moment, I am the only candidate who lives in the Electoral District of Illogan. I live in the very heart of Illogan in Churchtown. As you would expect  from an MK candidate, I am very much campaigning on real local issues. I believe that people should have a greater say in the decisions that affect their everyday lives. We need to protect our villages and hamlets from inappropriate development - new housing should be matched to local need and not to fuel profits for developers and encourage the spread of second homes and holiday lets. The roads in Illogan are neglected. This has to be addressed and someone should be holding Cornwall Council to account if they are failing in their statutory duty or their own stated policies in maintaining our roads. These are real issues for Illogan that people recognise on the doorstep.

But other candidates have been busy as well.

The Lib Dems have been putting in a bit of work. I have to say that I feel disappointed with David Ekinsmyth. David was the Lib Dem candidate in Illogan last year and he ran a very positive and honest campaign. This time round it seems that he has submitted to the Lib Dem party machinery and the prime directive of 'get elected at any cost' syndrome. I was particularly disappointed that David's leaflet appears to claim all the glory for the hard work that Illogan Parish Council has put in to negotiate the transfer of Illogan Park to Illogan parish Council. The transfer of the park to IPC has very much been a team effort and in consultation with the public. I don't think that claiming the credit for this will do David any favours. In fact I know it isn't. One person I spoke to told me that they hadn't yet decided who to vote for but that they had definitely decided not to vote for the Lib Dems after reading their leaflet and seeing how the Illogan Park issue had been reported. Karma.

Unfortunately the Westminster based Lib Dems also seem to want to mislead and misinform the local debate. In 2013 David Ekismyth finished in fourth place. He was soundly beaten by MK, Tory and UKIP candidates and barely managed to beat the absentee Labour candidate. Despite this we have the usual Lib Dem bar chart on the front of their leaflet showing how the Lib Dems and Tories are neck and neck with Labour a poor third. No mention of MK and no mention of UKIP. Of course the bar chart is based on data from the whole of the Camborne/Redruth/Hayle constituency from the general election as long ago as 2010. This manipulation of statistics is simply devious and dishonest and is a further reflection of the Lib Dem prime directive to get elected at any cost.

One of the MK teams of volunteers reported seeing a rather forlorn looking pair of Tory canvassers. The report described them as looking dispirited and very tired - but at least they're out there trying to talk to voters.

As yet, true to form, there is no sign sign of any UKIP activity. I guess that this is hardly surprising as their candidate, a member of Hayle Town Council, would have a long way to travel before he even began to knock on doors. UKIP candidates in local elections around here have a track record of treating voters with contempt. They hardly bother to even deliver leaflets let alone engage with local people. Instead they rely on the constant barrage of mainstream UK media reports to win them votes. Any decision that the UK may make to leave or stay within the UK will not be made at Cornwall Council.
Posted by Stephen Richardson at 04:47