The Stadium - National Aspiration or an Exercise in CV Enhancement? 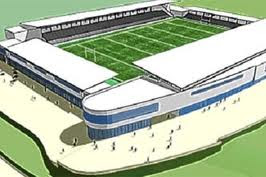 Yesterday Alex Folkes blogged about the apparent lack of a robust business case for the stadium.

I think that Cllr Folkes has hit upon the result of a similar problem that we face in Cornwall with the cabinet led Unitary authority.

Alex Folkes had asked Cllr Ridgers, Cornwall Council's Cabinet Member for the Economy and Regeneration, several times on what he based his seemingly extremely optimistic claims for the economic benefits and business case for the stadium - particularly the projected new spending and jobs that a stadium would bring.

I suppose that this is what happens when you have an insurance salesman who seems to know little about economic assessments overseeing a global consultant company that knows little about Cornwall.

There is much divided opinion about the proposed stadium project.

On the one hand we have Tory cabinet members and high ranking council officers who may simply want to have a stadium built in order to 'enhance' their CVs. These people argue the Conservative ideology of profit and business and are, perhaps, interested in showing that the stadium can be profitable simply to justify the improvement of their CV.

On the other hand there are those that simply aren't interested in sport and believe that building a couple of thousand houses on green fields is far too high a price to pay to indulge the sports fans.

There are also questions about the proposed location of the stadium - 10,000 capacity and nowhere near a rail link is one question that doesn't seem to have been answered effectively.

Personally I believe that if a 10,000 seater stadium could be justified on a purely economic basis then someone with real business sense would have already built it and be banking profit right now.

For me a stadium on the proposed scale is a national aspiration rather than a vehicle for profit. I believe that if the people of Cornwall have the confidence and desire to stage local, national and international events then they should have that opportunity - but they should also have the opportunity to make the choice rather than have it foisted upon them.

We need leaders who will put Cornwall first. Leaders who will consider building a stadium for the right reasons and who will approach the project from the aspirational point of view rather than because it looks good on their CV.

What about the cost?

Well the all singing, all dancing £24m stadium could be paid for by the people of Cornwall for around £2 per month increase in band D council tax over five years.

What if I don't want a stadium, think it's not good for Cornwall and don't want to pay for it?

Let's take advantage of the provisons of the Localism Act. Or if these aren't appropriate then lets take Kevin Lavery up on his idea!

Iconic projects such as a national stadium should be about Cornwall's place in Europe and the world and not reduced to creative balance sheet exercises and furthering careers.

Posted by Stephen Richardson at 06:21