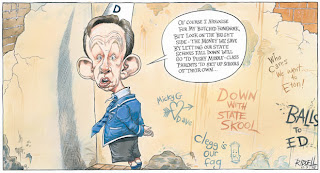 Michael Gove - that champion of 'Free' Schools and releasing local authority schools from state interference - wants to legislate to prevent parents from taking their children out of school for a family holiday.

Supposedly, the reason behind this is concern about rising truancy rates, which the government believes is resulting in the creation of an underclass and an increase in the number of young offenders.

What a load of rubbish!

Headmasters and schools already have the discretion as to whether to allow families to take children out of school for a holiday and it is something that is discouraged wherever possible.

Clearly there are multiple opportnities for parents to arrange holidays outside of school terms and most responsible parents do this whenever they can.

Sometimes though, families simply can't afford the premium rates that are charged by tourist industries during school holidays, and there is quite often a choice of going in term time or not having a holiday at all.

Gove's proposed legislation is just an attempt to grab headlines and make the Tories appear to be tough on improving truancy rates. The truth is that it will have no effect except to take yet more power from schools and centralise it at Westminster.

Why do I say this? I think it's fairly obvious that, while it isn't good for a child's education, going on holiday during term time isn't the same thing as the sort of truancy that creates the social problems that the government say they want to tackle.

Headmasters should be allowed to continue to take individual circumstances into consideration and judge each case on its merits.
Posted by Stephen Richardson at 04:46