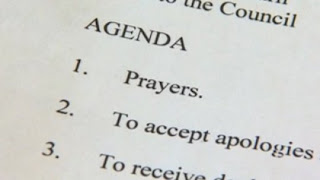 Following a legal ruling that it is not lawful for local councils to incorporate prayers into their formal agendas, Cornwall Council's Chairman, Pat Harvey, has decided that prayers are off the agenda - at least for a few meetings. Instead there will be an unofficial ten minute 'period of reflection' before the official council business begins.

The ruling that has caused this reorganisation of council agendas across the UK was the result of legal action brought by the National Secular Society against Bideford Town Council.

Eric Pickles, the Local Government Minister has criticised the ruling and says that he will fast track the commencement of a section of the Localism Act 2011 which will enable local councils to hold prayers as part of their official business if they so desire.

For me the question is whether religion should be allowed to influence or be a part of government at all and, if so, should there be a presumption in favour of Christianity or the Church of England?

Are we a Christian society or are we a multi-faith society?

If we are a multi-faith society then how can we justify saying Christian prayers and not conducting similar religious activities for other faiths? How do we justify unelected Church of England bishops having the right to influence legislation?

If we are a Christian society then shouldn't we be honest and open about it and make it clear that, although other faiths may be 'tolerated', Christianity is the 'official' religion.

These are the questions that are hard to resolve as, whatever answer you come up with, it will seriously upset a large section of society. This is why many politicians try to avoid having an opinion on the subject at all.

I think that this issue is going to run and run.

For example, if Mr Pickles is correct, and his Localism Act allows councils to make their own decisions, does this mean that in some areas there may be Islamic services as part of council meetings where the local councillors are predominately Muslim or does the law apply only to allow Church of England prayers? How will Christian councillors feel about being summoned to Muslim prayers?

The problem is that the divisiveness that the convergence of different religions inevitably brings, is set to become a growing dilemma now that this particular genie is out of the bottle. Perhaps the judges have got it right and the best thing is to keep religion and government separate?
Posted by Stephen Richardson at 14:14