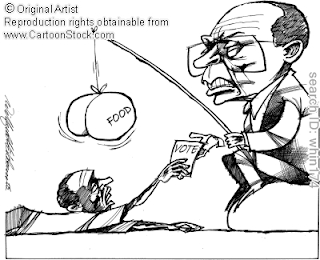 The government has promised to subsidise council tax bills next year where the local authority freezes their take. On the face of it a good idea?

But wait. Why link the subsidy to a freeze in council tax at the current rate. Well the idea is to keep services at the same level but without an icrease in council tax due to inflation. Fair enough you might think.

Is it really that simple though? You see the problem is that the subsidy is only planned for next year so what happens after that?

In two years time though, in order to keep the same level of service you will have to pay £1050.63 (assuming the 2.5% rise that the government is working on). Now of course in pragmatic terms it is a no-brainer to accept the government subsidy because at least you get £25 back this year.

My problem is this. The government is making out that it is a caring government that wants to do what it can for families in these hard times of austerity. In actual fact it is offering an electoral bribe now, knowing that next year local authorities will be having to make further cutbacks or face sending out massively inflated council tax bills.

I have been having a blogosphere discussion with Alex Folkes the Lib Dem Cornwall Councillor for Launceston Central here about this subject.

It seems to me that the Westminster parties are simply using this idea to score party political points with each other.

Cornwall is rather an exception to the UK where there will be Unitary elections early in 2013. In many parts of the UK these local authority elections have only just been held. This means that Alec Robertson's Tories will be announcing even more cutbacks going into the election or posting out council tax demands much higher than the previous two years - electoral bribe/cutbacks silver bullet.

So we have Tories/Lib Dems in Westminster offering bribes, knowing that in most of the UK their local authorities will have had a year or two to lessen the effect of cutbacks/increased council tax. Whereas in Cornwall the 'pick and mix' Lib Dems (they seem to be able to pick and mix whichever policies they think will get them re-elected, even if it isn't the official policy of their Westminster bosses) are gleefully advocating acceptance of the subsidy, fully aware of why the Tory administration in Lys Kernow is a little more reserved in its enthusiasm for carrying out the orders in from London.

In order to keep to my Golden Rule 1 I would just say that, rather than try to bribe local electors I would use the money to do some real good and tackle child poverty issues - or maybe increase our pblicly owned housing stock. Of course these probably aren't vote grabbing ideas but they would provide more long term and sustainable benefit for the people of Cornwall. If you want to see some other great examples of MK's alternative way of looking at things see Rob Simmons excellent piece here.
Posted by Stephen Richardson at 09:34