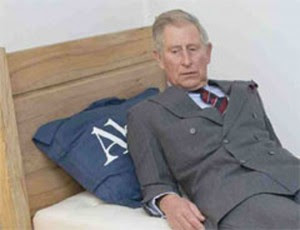 If the Duke of Cornwall retires to bed at midnight and is woken for breakfast at 9:00am by his staff, will he have trousered more or less than the average person in Cornwall earns in a year?

Therefore, Charles makes approximately £1486 more by getting a good night's sleep than a hard working Cornishman earns in a year.

A while back I saw comments on Facebook which maintained that it was obscene that prima donna footballers were earning hundreds of thousands of pounds while soldiers in Afghanistan were being payed peanuts for possibly sacrificing their lives.

I totally agree with those Facebook comments. The point is though, that it is society that chooses to pay over-inflated ticket prices at football matches while it elects a government that not only fails to look after its soldiers but fails to equip them properly as well. If society really wanted to change things it could refuse to pay the ticket price and could elect a government that would look after its soldiers.

It is obscene that footballers earn so much more than people who are prepared to lay down their lives. It also obscene that Charles Windsor, through an accident of birth, should receive more money for going to bed than a normal person would earn in a year and that all this is cloaked in secrecy and never subject to any electoral review.
Posted by Stephen Richardson at 06:44