Demonstration against WCAs in Truro 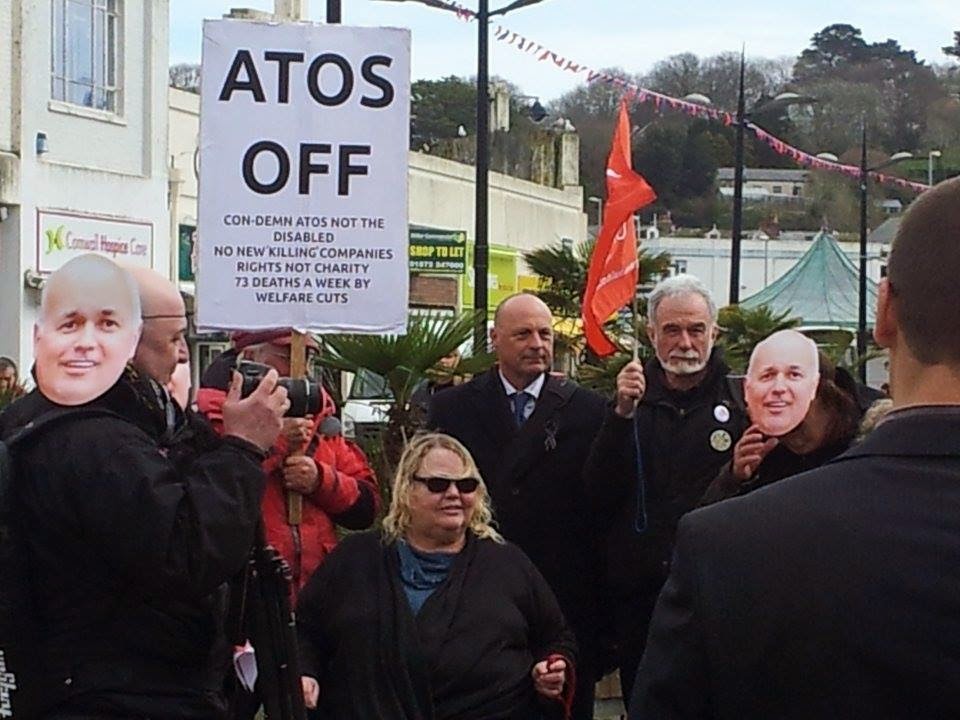 Here is the text of my speech to the demonstrators against WCAs in Truro today.

Friends, Romans, Countrymen – lend me your ears.
In Shakespeare’s play, after the assassination of Julius Caesar, Mark Anthony spoke to a crowd who were rejoicing in Caeser’s death. He told the crowd that he had ‘come to bury Caesar, not to praise him.’
Well today - I have come to praise all of you. Last week you forced the Westminster coalition Government to part company with ATOS. Well done! You did it, you forced them to get rid of a corporation whose sole purpose seemed to be to make a profit from making the lives of vulnerable people a misery.
But not only have I come to praise you – I have also come to urge you to carry on the fight and to bury the policy which tells us that assessing a person’s life is nothing more than a paperwork exercise.
Bury the policy which means that a face to face interview is predetermined to show that a person is fit to work just so that government targets can be met.
And bury the policy that has caused such utter desolation and distress that people have taken their own lives as a consequence.
Now I’m sure that no-one here disputes that we have to get value for tax payer’s money. No-one will dispute that fraudulent claims are a blight on society.
But we cannot allow the government to use this as a way to blame defenceless and innocent members of our society – a way to single them out for condemnation, intimidation and victimisation.
I say let’s bid goodbye and good riddance to ATOS. But let’s  make it a priority to bid goodbye and good riddance to the unfair and unjust Work Capability Assessment. Until we do there will be another big corporation waiting to come along and take up where ATOS have left off.
We deserve government that acts on behalf of all of the people and not just the well-to-do elite. This unholy Tory/Lib Dem alliance has shown, time after time, that their first priority is to cut taxes for the super-rich and to scapegoat the weak and frail.
To be honest you probably shouldn’t expect much more from the Tories - who have always done this - and from UKIP who promise more of the same. Nor should we expect much from the Lib Dems - whose only principle seems to be to do whatever it takes to get elected. But the real disappointment is the Labour Party. Let’s not forget that it was Labour that introduced WCAs and employed ATOS in the first place. It was Labour that ummed and arred over whether it would do away with the Bedroom tax. And only a week or so ago the Labour Party voted with the Tories to enable an arbitrary and indiscriminate cap on welfare for those who are most at risk.
Whatever the colour - blue, orange, purple or red – the Westminster parties have all sold out to Tory ideology.
We must guard against all those who seek to destroy the hard work that our parents did in building a fair society after the war. We must resist the constant shift to the right of centre in pursuit of the populist vote.
You’ve won this first battle – you have consigned ATOS to the dustbin of history. Now - let’s go on and win the war against WCAs. And let’s force the Government - whatever its party colour - to listen to our voice.
Posted by Stephen Richardson at 06:56